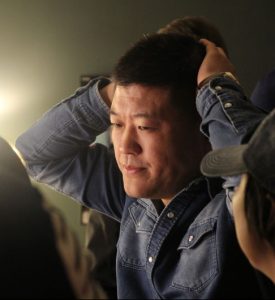 ZHANG Tao is a Chinese director (People’s Republic of China), screenwriter and actor.
Born in the Shandong Province, the birthplace of Confucius, ZHANG Tao is the son of peasants. He first studied law while working as a civil servant. He quitted his career to depict, through cinema, modern China and its evolutions. He joined the prestigious Central Academy of Dramatic Art of Beijing, within the department of theory and practice of the film from which he graduated in 2015. In 2012, during his studies, he shooted the short film Yi Ping which received the prize of the “best actress” at the 9th festival of the film of the Central Academy of Dramatic Art of Beijing. In 2015, thanks to his short film Laughing to Die, he was again selected for the 10th edition of the Central Academy of Dramatic Arts Film Festival in Beijing, where he won the Best Short Film Award “. He also received the “Special Jury Prize” at the 18th Shanghai International Film Festival in the short film category. In the same year, the film was screened in the “Exchange with China” selection at the Premiers Plans festival in Angers, in the official selection of the 12th China Independent Film Festival and at the 68th Cannes Film Festival at Short Film Corner. After filming extensively in the Chinese Shandong countryside, he released his first feature film, Last Laugh. A Franco-Chinese film, co-produced by the production company House on Fire and Bu Tong Pictures (China – Beijing) and Tender Madness (China – Hong Kong). He is currently developing his second feature movie with House on Fire, Dayao swims against the flow

In production: Dayao swims against the flow
2017: Last Laugh